A scientist’s journey from atheism to Christianity

A scientist’s journey from atheism to Christianity

Cy Garte had an unusual upbringing for an American. Despite his parents’ Jewish heritage, they indoctrinated him in the dogmas of both atheism and communism from an early age. Earning a PhD in biochemistry as an adult enhanced his delight and comfort in “the beauty, complexity, and wisdom of the scientific description of reality” and seemed to confirm his belief that religion was a mere fairy tale and the Bible was false, though he had never read it.[1]

But Garte’s faith in scientism was also shaken on learning certain scientific principles. For example, the uncertainty principle vital to quantum mechanics—namely, that it’s impossible to know the position and speed of an electron simultaneously. Science thus stated that some things are inherently unknowable. This led him to ask, “If the uncertainty principle is true (and it must be, since so much modern technology is based on it), then how valid is the idea of a purely deterministic and predictable world?” He began wondering if science and pure reason held all the keys to understanding our existence, as he’d been taught.

This led Garte to ask how life began, where the universe came from, what it means to be human and what’s the source of our creativity—of music, art, humor, poetry—to question whether science can really tell us everything. He wondered, if humans were a product of blind evolutionary chance, without significance or purpose, why would advancing human dignity and value matter? Garte ultimately came to the conclusion that “The universe is fine tuned for life to exist; but not for life to be created. The emergence of life on the Earth is an aberration according to the laws of physics and chemistry.”[2]

Garte accepts mainstream science’s view of life’s evolution, rejecting the Christian fundamentalist claim that the earth is a mere 7,000 years old. On the other hand, he notes that we have no evidence for any civilization—whether in the Middle East or Asia—more than six or seven thousand years old. This suggests that Genesis begins with the world as it was when God invited fully evolved humans—those whose descendants went on to build the world’s earliest civilizations—to rule it under him.[3]

Christianity was very different from what he’d been taught

Attending a church service for the first time in his life, Garte was surprised to find the Christians he met there weren’t hostile to non-Christians. They spoke of the transformative power of love, shook his hand and wished him peace. If Christianity was such a tragic historical evil, he wondered, why was the civil rights movement led by Christian clergy like Martin Luther King Jr.? Why did Christians like William Wilberforce play the leading role in ending slavery in the Western world?

Reading the Gospels, Garte was surprised to find them beautiful and inspiring. He was awed by the figure of Jesus presented there. And the Book of Acts struck him “as actual history, not at all like a fictional account concocted to enslave the masses,”[4] as his Marxist upbringing had conditioned him to believe. “Peter, the man who denied Christ at the end, and Paul, the archenemy of the new faith, sprang off the pages as real people. Peter was weak before he became strong; Paul was headstrong and vicious before he became virtuous.”[5]

Converting to Christianity was no snap decision 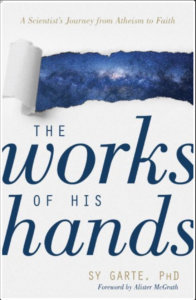 Fearful that he was somehow being fooled or misled, Garte was stuck for a number of years, drawn to the Gospel’s beauty but afraid to kiss his atheistic upbringing goodbye and embrace Christianity fully. Finally, he found the courage to “cross over”—to step “over the ruins of my prison cell into my new life of faith,” as he puts it. When he did so, his soul was flooded with joy and a sense of freedom from the doubts that had so long held him captive.

“Modern atheist taunts about the purposelessness and meaninglessness of the universe and our own existence are not only false but destructive.”

Now Garte is both an active member of his church and a fellow of the American Scientific Affiliation, the largest organization of Christians in the sciences, and serves as editor-in-chief of ASA’s online magazine God and Nature. He also helps his wife, the co-director of a local charity distributing food to the needy.

Growing in his faith, Garte has made many life-changing discoveries. He writes:

I learned about the power of the Bible as a guide from God to the central questions of our existence. I learned that the true purpose of science is to describe how things are, not to engage in misplaced speculation about why the world is the way it is. I learned that modern atheist taunts about the purposelessness and meaninglessness of the universe and our own existence are not only false but destructive. Most importantly, I learned that nothing I have learned came through my own merit, but only from the grace of our Lord, whose love and mercy are beyond understanding.[6]

To learn more about Cy Garte, read a fuller account of his journey from atheism to Christianity or visit his website.

[1] This quotation and any others in this article not attributed to another source are taken from Cy Garte’s Christianity Today February 17, 2020 article “I Assumed Science Had All the Answers. Then I Started Asking Inconvenient Questions.” https://www.christianitytoday.com/ct/2020/march/sy-garte-science-answers-inconvenient-questions.html   Accessed January 30, 2021.

Why did Jesus have to die?


One question anyone wanting to understand Christianity can’t help but ask is, Why in the world did Christians put a crucifixion—a hideous, brutal act and, in Jesus’ case, one of gross injustice—at the very heart of their faith? The answer, in…

Posted in Biblical teachings Why is Jesus called the Messiah?


In calling Jesus the Messiah (al-masih), the qur’anic messages used a word very familiar to the Christians and Jews in Muhammad’s audience. For then, as now, the concept of Messiah marked a major theological divide between them, with Christians embracing and…

Posted in Biblical teachings How to understand the Bible


The Bible may well be the world’s most misunderstood book. Having said that, it’s also the world’s best-loved book. Jews cherish its Tanakh, or Old Testament, while Christians take sustenance from both testaments. Muslims, too, believe that the biblical scriptures—which they…

How could a loving God send anyone to hell?
What makes the Bible unique?
Why did Jesus have to die?

Making Christianity intelligible to believers, unbelievers & everyone in between

Send this to a friend